Nearly a month after an excellent 3rd in class on the Kryle Trial in Ross-on-Wye it was time to head back to the hills on the Allen Trial organised by the Bristol Motor Club. For the second time this year I would be driving our VW Buggy with my Dad as passenger. Having not driven the car on a trial since the Yorkshire Dales, I was looking forward to taking the wheel once again.

A long drive down the M25 saw us arrive in good time for the start of the trial, yet our hopes of a dry day were looking slim with thick black clouds covering the Somerset sky. After scrutineering and a hearty bacon sandwich it was time for the off.

Tog Hill was the first climb of the day and offered no real challenge for class 8 as were able to run free tyre pressures. After a quick drive it was on to Section 2 known as Bitton Lane which like section 1 was an easy climb with no issues. After section 3, which was another doddle, it was time for Guys Hill, a tricky climb that can catch even the more experienced drivers out. Having arrived early at the section we were able to watch some of the earlier competitors attempting the formidable ascent. For Guys Hill we would have to adhere to the 12 psi tyre pressures and would have to attempt the infamous restart.

Fortunately, the restart didn’t look to demanding as many of our fellow class 8 drivers such as Charlie Knifton, Stuart Bartlett and Dean Partington all succeeded in clearing the restart and the section overall. However, Duncan Stephens, who was taking part in Mike Chatwin’s Wasp failed the restart just before our attempt and was handed 6 points. Feeling hopeful I set off towards the restart with reasonable speed and stopped the car with the two front wheels just over the restart line. Rather than opting for power I increased the revs on our VW buggy and slowly released the hydraulic handbrake and only let go of it fully until I knew we had traction. The car pulled away superbly and I don’t remember the wheels breaking traction at all. We cleared the section and headed on to Travers Hill.

Section 5 was an enjoyable climb. Although we had a restart to contend with the car performed well. We moved away from the restart with minimal effort required but I did have to wrestle the car back on track towards the end as it wanted to drift off the right down the steep bank.

It was then time for the Ubley Wood observed test. This is where competitors complete a certain course against the clock and often involves some reversing. Having set a reasonable time despite a bit of drifting on the wet grass it was time for the two Ubley Wood sections.

Once again, we were given challenging tyre pressure limits of 12 psi which would not make clearing the section any easier. Our attempt at section 6 was pretty awful it must be said. I assumed that despite the thick mud we would have some level of grip but there was simply none. However hard I mashed the throttle the car slewed around like a drunken snake looking for its prey and we didn’t even make it to the restart marker. After a disappointing effort on the first Ubley section we were looking to redeem ourselves on the next stage.

This section was a steep muddy climb through some moorland with a sharp right turn at the top where a small crowd of fellow trailers were spectating. I selected second gear for this section in the hope it would give us a bit more wheel-spin in case we struggled through the morass. I built up the revs to give us a bit of boost, pulled the clutch and we hurtled forwards at surprising pace. In fact, the pace was so surprising the car was completely in a world of its own and I became a passenger myself as any steering input achieved nothing. Mid-way up the section I felt the car slow down and changed down to gear one, but this was a total disaster and I had to snatch second gear back and started to bounce to try and keep the car moving. Having regained some grip, we neared the right- hand bend but the rear end started to slide and I had to counter steer in an attempt to regain control. As I made the right turn up onto the next part of the climb the car lost all power and cut out and the onlooking crowd let out a sympathetic cry. This was highly unfortunate as our efforts to clear the section were admirable and to not do so was disappointing. Luckily, we only gained three points.

After a quick lunch stop it was on to Burledge. Similar in nature to the first three climbs of the day, the section was a gentle and despite it having a restart we were soon at the top of the hill. After a five-mile journey by road we arrived at the Fry’s Bottom Wood sections where we would have to adhere to the 12 psi tyre pressures. For Fry’s Bottom 1, not only did we have a restart but also a deviation off track through some trees. As we moved off the main track onto the deviation all forms of grip went out the window and the car wanted to slew off to right all the time. In an attempt to make the sharp left turn back up onto the main track I slowed down too much and the the car kept moving to the right. After a light collision with a very annoyingly placed tree I tried flooring it out the deviation but there was no traction and we got stuck in a rut. Eight points were added to our overall score. 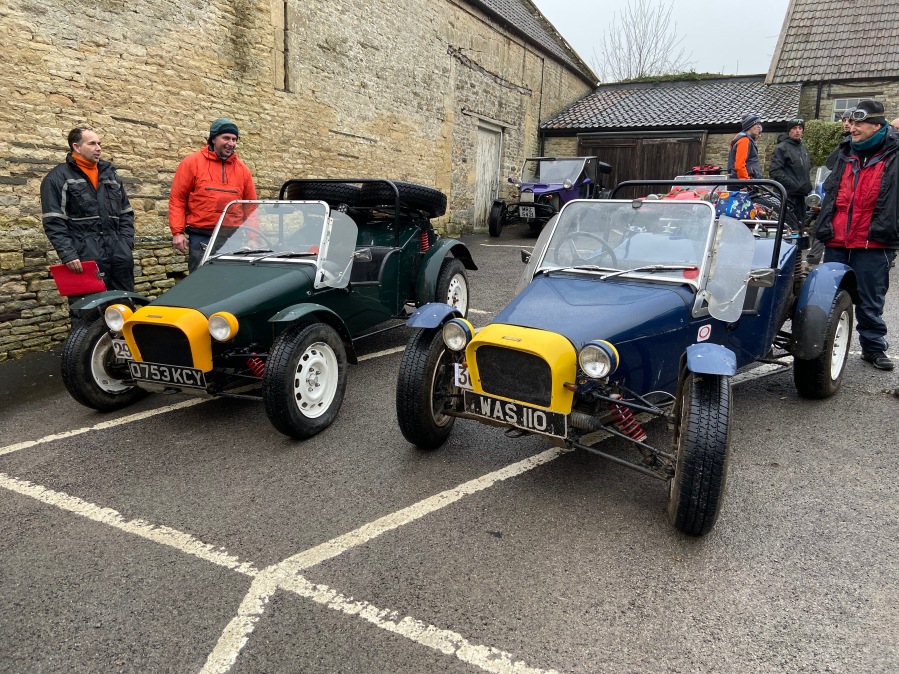 It was then on to the Fry’s Bottom observed test where once again we would complete a certain course against the clock. The car performed well here, and we set a good time of 13 seconds. Fry’s Bottom 2 was next which proved to be relatively easy. The restart wasn’t too challenging, however, mid-way through the section I felt the car lose traction so opted for gear two which provided us with that extra wheelspin to clear the hill. Fry’s Bottom 3 was another section where most people gained points due to the awkward restart. The drive up to the restart itself was easy and I positioned the car with the front wheels just over the restart line. I boosted the revs up and pulled the clutch and even though the wheels were spinning at an alarming rate the car didn’t move. After some serious bouncing the car did find some traction and we were centimetres from scoring a four but had to settle for five points.

With the light fading we headed on to the final section of the day, John Walker. Here all competitors would run at 10 psi. This was a fun climb to end the day. We careered through the water splash at the bottom of the section then trundled to the top in gear two with no dramas.

After the trial I was unsure as how to judge our efforts. We had an excellent result on the Kryle, and the conditions were in many ways worse. Then again the Allen Trial was only my second event behind the wheel and no trial is the same, not to mention the fact that I’m still learning how the car behaves on certain surfaces. In the end we came 10th in class having scored 16 points on the day which isn’t too bad considering there were 17 competitors in class 8 alone. The Allen is a great trial and the organisers always do an excellent job to make sure it runs smoothly.

2019 has been a good year for both myself and my Dad and we have loved taking part in trials all across the country. A mention must go to those who put themselves forward to organise and marshal these events, without whom this great Motorsport that we all love would become obsolete. Whether it’s a big trial like the Exeter or a simple grass trial held in a field, we are fortunate to have volunteers and Motorsport clubs who help to organise great trials for all classes to enjoy. Let’s hope 2020 will be another great year for trailers across the country. One thought on “The Allen Trial 2019 Report”