You’ve just passed your driving test and freedom is now at your fingertips. But what car do you choose to travel to your Nan’s on the weekend? What car is going to make you stand out in the Sixth Form car park? Here are my Top 5 best first cars with a little advice on how you can save money on car insurance.

Ford KA – 2003-2008
This has got to be one of the best first cars to own. They might look a bit ugly, but they are excellent cars to drive. For a small car they’re relatively comfortable and because of the cars short-wheelbase they handle well in all conditions. The KA isn’t the most advanced when it comes to technology, however. Most cars either have a cassette or CD player depending on its age. This isn’t too much of an issue as you can swap out the old one for a more modern option with an AUX point for less than £50 because as a young driver you want to play your “banging tunes”. The Ford only has four seats, but this is plenty, and the boot space is big enough for a weekly shop. I learnt to drive in a Ford KA and passed my test in one. They are great to drive and my journey to and from school was a breeze even in winter.

The KA is also a cheap car to insure as it is in insurance group 10, a low group meaning you won’t have to break the bank. As for buying the car itself, they are affordable, ranging from £200 to £1500. Be wary of the mileage though as you don’t want to be buying a KA with over 60,000 miles on the clock. It is also important to mention that KA’s are prone to rust, particularly around the fuel filler cap which can be a problem when it comes to getting a MOT. Make sure you check that area if you consider buying one because you don’t want any hassle when you have just passed your test. The KA is a great first car and for the price it is something any new driver should consider. 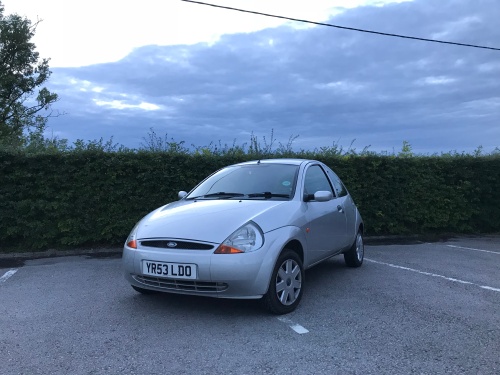 The German car giant know how to make a small, economical and affordable hatchback and the VW Polo is no exception. They are well made and can withstand any bump or scratch that a 17-year-old might gain in the early months of driving. The older Polo’s, although more affordable for a new driver are less attractive and don’t come with the crucial AUX point, however, a CD player is a more common feature. The 2010 model onwards is the car to go for as these are better looking and more reliable. Mileage on a car like this is something you don’t really have to worry about as the Germans make cars that will go to the moon and back without fault. For a 1.2 litre model you would have to spend between £3000 to £4500 for a nice one if not more for ones that have done under 50,000 miles. If your budget is smaller do not rule an older VW Polo out. They are very economical, so you won’t have to make too many trips to the fuel station, even if you’re doing long distances.

Buy any of these three and you will struggle to find any differences between them. The Aygo, C1 and 107 are the same car with slightly different looks. Any of these would be a great choice for a first set of wheels as they are simple and sturdy. Yes, they might not be the most attractive but with a little 1.0 litre engine they are certainly economical and fall in a low insurance group. The quality of the interior is questionable, however. The gearstick for example, looks like it’s been taken out of an old Peugeot 205 diesel and everything all feels a bit cheap. However, cheap is what you want when you’re looking for a first car so day to day running you will probably overlook the quality and appreciate the reliability.

Price wise you could pick up a nicely kept Toyota Aygo with around 50,000 miles on the clock for around £2000. If mileage is not a concern, then you could easily find one for between £1000 and £1500 but do be sure to check that the car runs well and doesn’t have an alarming service history.

I certainly couldn’t leave this car out as they are incredibly popular with new drivers. Corsa’s are great as they are often hassle free and offer the basic needs of a 17-year-old. Their simple interior layout with sturdy build quality means they’re great for driving you and your mates to McDonald’s and won’t rip you off when it’s time to fill up with fuel. The Corsa models also offer a wide array of engines from 1.0l all the way to up to 1.6l, although you won’t be going for the latter option because the insurers won’t waste their time on quotes for a teenager on a car with 130 bhp. Furthermore, if you opt for a smaller engine such as a 1.2l you’ll save a fortune on insurance as most fall into lower insurance groups ranging from 2 to 10. A quick look on Autotrader and I found a perfectly acceptable example, for just over £2,000 with only 18,500 miles on the clock and it had the 1.2l engine that falls into insurance group 1. Bargain!
Corsa’s price range is very wide so make sure you go for a model from 2006 onwards. Check the insurance groups because the lower the better and don’t be afraid to spend a little more on a newer car with less miles because it should run for a long time.

Hear me out on this one. Not only is the Fiat Panda a great first car, it’s one of the best cars in the world. Yes, it looks a bit like a box on wheels, and yes it might have the charisma of a chipped mug, but ultimately, this car is good and if you can have one as your first car then your laughing. Interior styling is somewhat lacking, yet you get all the essentials a young driver needs. The stereo is often a point of concern, but this can easily be swapped for one with an AUX point or Bluetooth. Due to its obscure shape the Fiat Panda has plenty of room in the back for passengers, however, boot space isn’t massive. Again, the smaller engine models of the Panda such as the 1.1l active fall into insurance group 1 so more savings can be made with regard to insurance cover. Furthermore, the Fiat Panda 4×4 offers all the excellence of a Panda with four-wheel-drive making it a superb car to tackle any terrain or weather. A low mileage 4×4 will cost you around £2000, but a two-wheel-drive version can be less impacting on your budget. You can grab one for between £500 and £1500 depending on mileage and condition.
If you fancy the newer model then you may need to spend over £3000, but don’t be put off by this investment. The 0.9l Twinair using the engine from the Fiat 500 is superb and even makes a great noise. If I could go back to choosing my first car, I’d opt for a Fiat Panda any day of the week.

They are a first drivers worst nightmare. A little telematics box monitoring your every move while you drive along. Although they are a pain and often drive you mad, the black box is very useful when it comes to saving money on insurance. I managed to save at least £500 – £600 by having a black box fitted to a Ford KA for my first year of driving. It monitored my usage, speed and smoothness and it wasn’t hard to score well as long as you stuck to speed limits and didn’t accelerate or brake too hard. Black boxes will only make you boil over when you’re just trundling along at the speed limit and a business man who is late for an important meeting is touching your bumper in his German saloon car. I think I was overtaken once in a 30-mph zone just because I was sticking to the speed limit. Madness! On other occasions people pulled out in front of me and I’d have to slam on the brakes, ruining my smoothness score which is rather unfair if you’ve been driving safely. Usage would only cause a problem if you drove late a night which is less impacting on your overall score.

Ultimately, a black box in the long term is beneficial. You can save a lot of money and, the better you drive, the bigger the discount you receive at the end of the policy. So, when you come to reinsure your car you should be able to get a sizeable discount, and you’ll have one year no-claims bonus to your name lessening it even more. On a side note you can get a sticker for your rear window advertising the fact that you do have a black box. Whether you install one of these is entirely up the driver, but if you are tired of people judging you for driving safely on the road perhaps having one isn’t such a bad idea.

In summary then, the cars listed above are all great starting points. They are tough little cars that can take a knock or two, they are economical and won’t ruin your bank account when you need to fill up and reliability shouldn’t be an issue either. When viewing a car, make sure everything is working well such as the engine, gearbox and clutch. In addition, make sure you listen for any worrying knocks or noises as these could be serious issues which you don’t want to be dealing with. Always take mileage into account as higher miles on a car can often increase the chances of it gaining a fault, therefore when buying your first car, don’t fell bad if you spend a little more on one that’s done less miles. Before you pay for insurance, research all the comparison websites to try and find the cheapest policy. When you’ve got your new wheels, get out there and enjoy the freedom of driving!